RavenDB is at the forefront of data management innovation - leveraging open-source development and an intense focus on usability to offer efficient, versatile and highly secure database services to business application developers worldwide. The latest release of the open-source NoSQL document database, RavenDB 5.0, accommodates both local and hosted environments, and adds time series support and document compression to its robust feature set.

As open source security enthusiasts, we are particularly interested in RavenDB’s open-source approach to managing and securing data - and how this approach has enabled RavenDB to surpass competitors in areas including usability, integration and data security. To gain an in-depth understanding of the company’s latest release, we spoke with RavenDB Founder, CEO and Lead Developer Oren Eini about the defining features of RavenDB and RavenDB Cloud, some notable use cases, security considerations - and more.

Secure, User-Friendly Data Management for Both On-Premise and Hosted Environments

Through RavenDB 5.0 and RavenDB Cloud, the RavenDB 5.0 release brings efficient, integrated and highly secure data management supported by a robust feature set to both on-premise and database-as-a-service clients. All of the purpose-driven components that comprise RavenDB 5.0 were built from the ground up - resulting in a database that is fast, fully integrated and widely available.

RavenDB also offers enhanced data security through usability - a defining characteristic that sets the database apart from its competitors. The company uniquely views support as a cost center as opposed to a revenue center. Insight gained through RavenDB support calls is used to modify the database to make such calls unnecessary in the future. Eini explains, “Viewing support as a revenue center disincentivizes vendors to create user-friendly products, which has drastic negative implications for data security. Usability and security are closely tied. Database breaches continually demonstrate that having complex security is equivalent to having no security at all.” Eini elaborates, “Our approach to security embodies operational simplicity and automation.”

The Power of Community 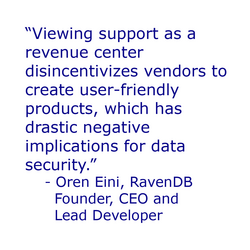 RavenDB vs. RavenDB Cloud: How Do The Two Compare?

RavenDB 5.0 and RavenDB Cloud make the RavenDB 5.0 release ideal for developers looking to deploy an on-premise database, as well as those seeking a hosted platform. Eini explains the benefits of both scenarios, “For some users such as healthcare and financial institutions, having full control over the entire stack is important. Others need a database that can be deployed on the edge, where connectivity isn’t assured. For these users, the ability to deploy on location, without any external requirement, is very important.” He elaborates, “Running on cloud enables developers to push all the operations overhead to someone else, making it much easier to provision and make changes on the fly.”

That being said, the on-premise and cloud versions of RavenDB are essentially identical, both running the same binaries and offering the same capabilities. In terms of security, both take similar measures to protect sensitive data, including  X509 certificate authentication and encryption of all data over the wire, the ability to limit connections to specific IP addresses or ranges at the network level and full auditing support for all operations.

RavenDB Cloud integrates a selection of additional awareness behaviors and automated security measures. Environmental information is incorporated into RavenDB instances to allow them to better calibrate themselves to environmental factors. For example, when using burstable instances, RavenDB Cloud reports the status of CPU credits to reduce background tasks when running low. In RavenDB Cloud, backups are encrypted by default, whereas the on-premise version of RavenDB requires users to select an encryption key if the database is not already encrypted.

Despite these differences, Eini feels that the level of security that users can expect from RavenDB Cloud and RavenDB 5.0 is roughly comparable. He reflects, “The main difference is the additional steps that on-premise users have to go through. With RavenDB Cloud’s fully-managed services, virtually everything is done for the user.” He adds, “With both versions, we pay a lot of attention to the security of the system in general.”

Although RavenDB Cloud offers a high level of convenience through increased automation and fully-managed services, the majority of RavenDB customers run on-premise or edge systems. Over 70% of these systems run on Linux, with the rest running on Windows servers. It is very common for RavenDB to be deployed on the edge. “RavenDB can operate in a disconnected manner, but the data will be synced to a central location - usually on the cloud,” Eini explains. “We have a customer who has deployed RavenDB inside industrial robots running Raspberry Pi and another running RavenDB in a Point of Sale system.”

RDI Software, a landmark RavenDB customer, has deployed the database on edge to over 36,000 restaurant locations, where the platform processes upward of 500,000 USD per minute. The company has a unique requirement for a database: robustness above all else. “The typical employee for a fast food restaurant is a teenager on minimum wage - not exactly your ideal IT worker. As such, we have to deal with very old hardware, used in often hazardous environments and operated by people with very little experience”, Eini explains. He elaborates, “RavenDB has been used in this capacity for over half a decade, because it is able to handle this situation and doesn’t require constant supervision. In particular, RavenDB’s zero admin capabilities mean that the database is able to adjust, independently, to each individual environment and behavior.”

Visit ravendb.net to learn more about the database, and to download RavenDB 5.0 or RavenDB Cloud.

Why the hunt is on for open-source skills

Tails is the most secure Linux distro out there.